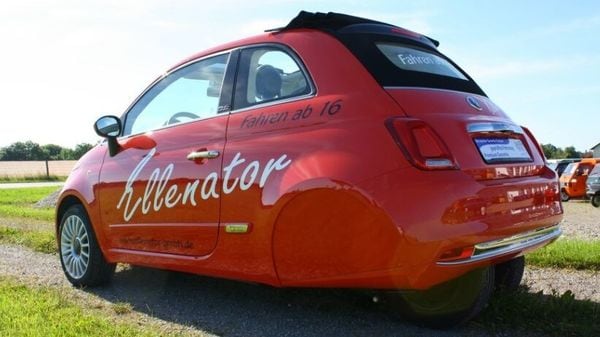 Creativity has no limits when it comes to tuning the vehicle. That’s true for this Fiat 500 that has become “three-wheeled,” even if it retains its four-wheel drive. A German company called Ellenator is behind this strange but unique creation.

Ellenator is changing vehicles to make them suitable for 16-year-olds who want to drive. Reports say these modified vehicles will be classified in the L5e three-wheeled vehicle class. Under German law, anyone aged 16 or over can drive unattended three-wheeled motor vehicles classified in the first category and should have a maximum speed of 45 kmph. The company is changing cars like the Volkswagen Polo, Seat Ibiza, Fiat 500 and Skoda Fabia for about $ 7,000 to make them suitable for teenagers.

The company started this by replacing the standard rear axle, consisting of a pair of 14-inch wheels a few inches apart. This new set of wheels fits into a modified section of the trunk and the standard wheel arches are filled with sheet metal. The engine is also revised to limit the power generated by the vehicle to only 20 hp. These skillful changes make the car seemingly three-wheeled for teenagers.

With the support of Renault, Nissan and the Madras High Court, it allows production with drivers
Read More

Ellenator also has a commission to change the vehicle to its original condition when the owner reaches the legal age of 18 years of uncontrolled driving in Germany.

Earlier, it was reported that a Honda Civic was changed when the vehicle was taken to the roads with a bicycle that two people could pedal. This zero-emission bike car had a top speed of 3.2 kmph.